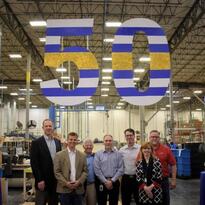 50 years in business is an outstanding accomplishment. The average life span of any new business is 30 years.

Our founder, Bob Ricketts, had the vision, the work ethic, and the business sense to put it all together but he knew it could never be done alone. As the saying goes, "behind every great man is a greater woman" whose support and sacrifices allowed him to succeed.

Bob also understood that a company is only as good as all its employees. He cared about everyone who worked for Concote. Bob Ricketts was a truly unique individual who will always be missed.

This Anniversary is also about the Second Generation taking Concote over with new and fresh ideas.

From 2010 through 2013 the company, along with the worldwide economy, was challenged.  It was the most difficult time in Concote's history but by no means the only time. Fortunately, we have always pulled through.

Shelby Ricketts, now at the helm, along with Andy Webb, John Frederiksen, and Barry Taylor took on the responsibility in 2013 of turning the company around. With their input and the help of all employees, we are profitable again.

We thank all employees who make Concote Corporation successful and a great environment in which to work.